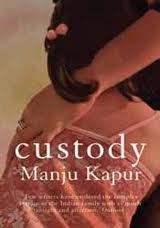 Manju Kapur has been described on the book cover as "the great chronicler of the modern Indian family". I know that she has done that in her previous books, Difficult Daughters and Home. Those books were family sagas, in fact "Home" reminded me of the long-drawn TV serial "Buniyaad" from a couple of decades ago. Custody is her take on contemporary urban Indian life and the shaking of the great institution of the traditional Indian family.

The book is about the disintegration of the marriage of the upwardly mobile Raman Kaushik, rising executive in a global beverage company. His stunningly beautiful wife, Shagun falls for his dynamic boss, Ashok Khanna, ex-pat extraordinaire, sent to rescue the company bottomline in India. The narrative cursorily describes the comfortable marital life of the Kaushiks, blessed with two gorgeous children, 8-year old Arjun and 2-year old Roohi, with extended family of grandparents living within reach but without the suffocating joint-family situation more commonly described in such family tales.

Most of the book is devoted to the years after the discovery of Shagun's infidelity by Raman using a detective agency for proof and the impact of Shagun's leaving, with her kids, to her lover's home. The chaos of the altered domestic scenario is captured realistically through the eyes of young Arjun; the disapproving but silent suffering of Mrs. Sabharwal, Shagun's helpless mother and the vicious comments of Raman's angry mother. Shagun takes the kids away one day and while all she wants is a divorce, Raman refuses to give in, filing for custody instead, with the help of his obliging lawyer cousin who leads a perfectly peaceful family life in comparison. When Shagun realizes that the only way to secure her freedom from Raman is to give him custody of the kids, she calmly gives them away, retaining visitation rights during holidays. In the meantime, the smart Arjun starts avoiding school in order to gain his mother's attention but ends up in an all-boys, elite boarding school in Dehradun, a spot he secures due to the fact that Ashok Khanna, the new man in her mother's life is an alumnus of the prestigious institution.

Somewhere midway through the book enters Ishita, a wronged bahu of a family that sends her back to her maternal home when they find out that she is unable to conceive due to a childhood illness which was not disclosed at the time of the arranged marriage. Initially Ishita is shown as a weak woman who finally finds a purpose in her life when she begins assisting a neighbor with her school for street children. Just as you start rooting for Ishita's independent streak, a bitter Raman struggling with the full-time care of two-year old Roohi enters Ishita's life. Conveniently for the story, the senior Mrs. Kaushik and Ishita's mother are neighbors and friends, bemoaning their respective fates that has brought divorce into the lives of their precious children.

And as Shagun builds her life as the glamorous trophy-wife of a business tycoon, Raman marries Ishita, assured that she will provide the motherly love and attention that his daughter needs. As the days pass, Arjun, an occasional visitor during holidays, en route to New York, causes unhappiness to Ishita as he seeks to poison his sister's mind by reminding her of her "real Mom". And therein starts the new equation in Raman's life, as the couple make up excuse after excuse to not send Roohi to New York at the court appointed visitation times. Arjun makes the trips alone and a vengeful Shagun ensures that Arjun does not get to see Raman, tit for tat, for keeping her daughter away. Between the two women in his life, Raman is torn between doing the right thing for his children versus doing the right thing for Ishita. He ultimately pays a price for keeping the semblance of a functional family at least for Roohi, a resolution that Ishita is only too pleased with and one that Shagun has to bear, as a punishment for her choice.

The book's strength lies in the strong story line and an unsentimental approach to the telling of it. But the main characters, Shagun, Raman and Ashok seem to be one-dimensional creatures with no nuances to mark their individuality. Shagun is a beauty, Ashok is the brilliant boss and Raman is a hard-working regular guy trying to rise through the ranks through his sincerity and hard work. Ishita for while seemed interesting as she came into her own following her divorce but quickly becomes a caricature wife, this time clinging to her only hope of motherhood, as the mother to Roohi. All the women fall into typical stereotypes, the anguished Mrs. Sabharwal, an accessory to her daughter's crimes, one who loses a good son in Raman, her daughter to Ashok and the grandchildren in the battle. Shagun appears the superficial gold-digger, looking for an excitement that matches her beauty, gratifying herself even as she is aware of its consequences. Other than the physical/financial aspects, it is not quite clear what forms the basis of her attraction and subsequent marriage to Ashok. Ishita is only too happy to ditch her new-found independence as a teacher of the slum children, once Raman proposes marriage. It is as if any other aspect of a woman's personality is of no consequence once defined by marriage and motherhood, in spite of previous trauma in that department.

Perhaps Manju Kapur has honestly chronicled the lives to today's Indian woman. But it does not give much hope for the masses.