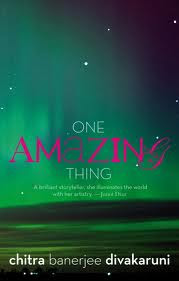 Nine people are trapped in the basement of a building in an unnamed American city. This group of strangers are bound together for an unspecified period of time due to the earthquake that traps them in an unlikely place - the Indian consulate office. With this interesting premise, Chitra Banerjee brings together people of various races, religion, age and economic backgrounds to rally around their shared fate of being forced to stay together while they await rescue or death. The strange situation of spending time in a dark gloomy about-to-collapse building, makes the usually reticent strangers divulge their secret stories to a willing audience that amicably suspends judgement as it listens intently to each of them in turn.

Chitra Banerjee has woven together a reasonably plausible plot to explain the reasons for the stereotypical characters to want to visit India in spite of their apparent lack of connection to the country or their reluctance to do so, as the case may be. So we have Cameron, the African American ex-military man, a well-heeled Caucasian couple, the Pritchetts, a Chinese grandmother (Jiang) with a surly teenager granddaughter Lily, Tariq an angry Muslim boy, Uma a young single woman, and the two Indians from India - the consulate employees Malathi and Mangalam, taking turns to spill their stories into a room where a leaking water source starts flooding the floor, parts of the ceiling collapse and their hopes of rescue decline with each tale that is told.

I have read many of Chitra Banerjee Divakaruni's books and I am impressed with her writing style. The prose is poetic and her metaphors are unique, underlining the beauty of each observation. But her strength has been in writing for a predominantly American audience and her stories border on a magic realism underpinning to narratives that superficially appear to be about contemporary issues. This hybrid genre unique to Indian writers writing about India from their location based in Western societies has spawned many authors and Banerjee is at the forefront among them. While she has been prolific in creating diverse narratives, this book is different from her usual formula. With the key ingredient of "exotic" India missing from the stories within the larger story, the book is at best a half-baked attempt to link what might have been better presented as a collection of short stories instead of a homogenous novel.

The individual characters don't seem like real people and the disjointed tales serve no larger purpose of moving the story forward. Perhaps the biggest disappointment is the ending which really is neither an ending nor a reasonable denouement for a novel. Although an attempt to explain the title is made in the last few pages, it fails to register. The book is not in the same realm as any of Banerjee's previous writings and appears to a half-hearted and shoddy attempt at publishing within a deadline.