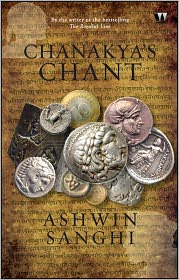 Historical fiction is not really a genre that I prefer. But when the hefty 450-page paperback came into my hands, I started reading the first few pages, assuming that this book would leave soon. I read the Prologue and was hooked. It took a while to go through the entire book but each day I would eagerly return to the pages, so see how the bilayered narrative developed.

Chanakya's Chant is a story about the legendary Chanakya who begins life as Vishnugupta, son of learned Chanak of the ancient kingdom of Magadha. But Chanakya's Chant is also a Sanskrit verse that is described multiple times in the modern day story that parallels the original tale. Pandit Gangasagar Mishra, a modern day Chanakya uses the powerful chant to further the political career of his protege in the sleazy world of Indian politics. The two stories are told side by side and mark the steady progression of the potential rulers, Chandragupta Maurya as leader of a united Bharat in 340 BC under Chanakya's tutelage and of Chandini Gupta, aspiring to be India's Prime Minister under the training of Mishraji.

It is an extremely well-researched book with very tight narration that keeps you glued to the pages as you learn the smart and underhanded ways in which kings are mere puppets in the hands of the kingmakers. With the uncanny ability to process reams of seemingly unrelated information, predict the behaviors of the other sides, and ruthless precision, these Chanakya's steadily advance their proteges towards the desired goal. While the historical Chanakya leaves his long hair untied until he fulfills his prophecy of avenging his father's death, the motivation of Gangasagar Mishra is not quite clear.

The author, Ashwin Sanghi, has divulged many secrets commonly known to modern-day politicians and some historical secrets like the use of the many medicinal plants available in India which can be used to harm or heal. Preying on the vices and weakness of men, even men as powerful as the great Alexander, Chanakya and his counterpart Mishra, bring about the fall of emperors and ministers, all mere pawns in the race to secure the highest position of power. One striking aspect that stands out is the fact that the art of politics is truly the Arthashastra, the science of wealth, not governance.

A must read for history buffs but highly recommended for those looking for a thrilling read as well.