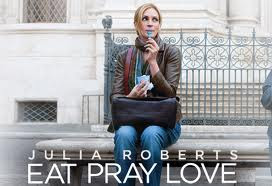 Yesterday I watched the motion picture version of Eat Pray Love, a book I had enjoyed reading almost a year ago, at Evening Hour. It is an author's job to bring her character's to life, in the imagination of the reader and as individual readers, we have unique visuals for the same written word. So is the case when one director chooses to make a movie based on a book, the reader is curious to see how another person has visualized the same written word. Of course it helped that Julia Roberts was playing the central character, Elizabeth Gilbert, the author, whose year-long spiritual journey had been chronicled in the book.

The thought that crossed my mind as the final credits rolled, with Liz sailing off into the sunset with her new beau was that the movie was too long. The highlight of the movie was the fantastic cinematography where the essence of the three exotic locations Italy, India and Indonesia (Bali, specifically) were captured lovingly in the frames. Julia Roberts pulled off the character of the tormented Liz who escapes her New York life (a city that seemed bereft of its normal vibrancy, reflecting the mental state of the heroine) to find herself. In the darkened frames in various cities Julia appears far from her "Pretty Woman" image but she does justice to the part nevertheless. Interesting characters cross her path, from Sofi,Giovanni and Luca Spaghetti (really!) in Rome to Tulsi and Richard from Texas at the unidentified ashram in India and of course, Ketut, Wayan and Felipe in Bali. The movie comes across as serious cinema with a sprinkling of comic elements, romance, heartbreak and friendships. An honest depiction of human life and its similarities across the globe. But it felt too long.

I had not thought of the book as being too long but the book did have 108 chapters (of varying length) dealing with the major parts of the story. It is unfair to compare the movie with the book and to judge it inferior, not because it strays from the story (which this one does not) but because it does not match your visualization of it. In my opinion, where the movie falls short is in reflecting the dark humor and sometimes, the irreverent amusement that Gilbert infuses into her book when she describes her experiences. I missed some of the other characters in the book that do not show up and also some of the key turning points in her journey.