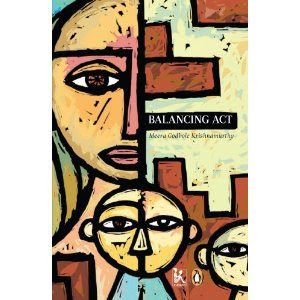 I chanced upon the book at the Mumbai airport bookstore. I wrote down the titles for three books by new authors that seemed intriguing, two were collections of short stories with a Mumbai theme and a novel about dilemmas of motherhood, aptly titled Balancing Act. I bought the novel because the description on the back cover sounded interesting. Wrestling with the subject of finding fulfillment in motherhood after having tasted professional success, a commonplace occurrence today, it appeared to be a contemporary, introspective read.

As promised, the book deals with the subject through the eyes of Tara Mistri, a young woman with a husband who travels a lot and burdened with the domestic reality of caring for two young children in sunny San Diego. Tara is an architect with a track record, who chooses to stay home after the birth of the first baby but is not convinced whether she has made the right choice. Her confusion in fitting in as a stay-at-home Mom and her lure for finding meaningful work outside the home is aptly described in the 230-odd pages. But nothing really happens in the story.

A bunch of characters, all women, appear in the narrative but are not of much consequence. The husband is a convenient place holder who gets a little more of writing space towards the end but the tone of the book is one of confusion. As with many authors, the novel appears to be a thinly disguised autobiographical first novel with personal observations but no insights into the issue at hand. Until the end, Tara is a housewife (a terms she despises) so the title of the book totally escaped me since there did not seem to be too much balancing going on. A lot of architectural details are woven into the narrative along with quotations by famous architects, including Louis Kahn, creator of the Salk Institute which lies in Tara’s neighborhood, a building that she reveres. Not surprising, considering that the field of architecture is the author, Meera Godbole Krishnamurthy’s primary area of expertise.

The book suffers from a whiny protagonist who is difficult to empathize with. She is both blessed and cursed (misery of her own making) with what appears to be a perfect life, an apparently supportive husband, beautiful kids and a choice to make in the matter of her going back to work. The messages are mixed as author tries to present an equal view of both sides of the equation of working mothers. The pervasive perplexed undercurrent of the novel stems from the superficial treatment of the subject and a marked reluctance to dig deeper to answer the questions honestly. It is this aspect that dilutes the intent and presents the book as a lightweight attempt at what should have been a wonderful canvas to chronicle the contradictions of women of this generation.

What the book needs, is a candid answer to the quintessential question posed by Kahn “What do you want, brick?” It is a shame that neither the editor nor the publishers chose to ask this question of the author herself.